A. The Mbah water project in Cameroon

When I witnessed Global H2O’s work in Uganda, I was immediately hooked. Firstly, the pure process of seeing water shoot out of the ground is just fascinating to see. Secondly, and more importantly, the effect this has on the people living close to the new water source is immense.

Back in Germany, I was hanging out with my friend Sammy who is originally from Cameroon. His mum was visiting at that time and we got to talk about the water situation in their village. She told me how 2,000 people in the village of Mbah do not have regular access to clean water and how much they would appreciate help from outside to solve this issue. The village is situated in the very hilly region around Kumbo in the North West region of Cameroon and is thus difficult to reach. Especially after a war over independence and oil broke out in the English speaking region of Cameroon, local authorities have other things in mind than taking care of water infrastructure issues in a small village. For me, the situation was clear: I would start collecting money to fund a water project. As Global H2O had only operated in Uganda at that time, I decided to fly down to Cameroon with Sammy in order to manage the project on site.

But first, I needed funds. And also, I needed a local contractor to know how much to collect. Through the help of Sammy’s mum, we got in touch with Elvis from Ets Formavise, a local construction company in Kumbo. Together with the village water committee, we made the plan of providing water to the village at two different places:

1. THE HEALTH CENTRE OF MBAH
The health centre is a small building just off the main road which is mostly used to treat malaria and to deliver children. Hard to imagine that there was no running water. Whenever they needed water, they went up to the main road and asked a moto bike driver to get water for them. Of course, this water would often come from doubtful sources and even make things worse sometimes. This place needed a tap with running clean water! 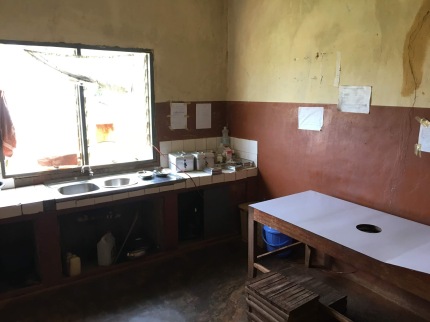 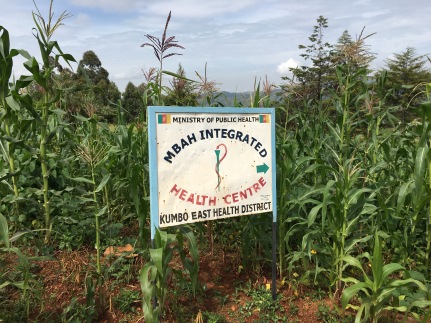 2. THE MBAH MARKET
Every Saturday, people from all of the surrounding villages are coming to the market in Mbah to sell their produce (fruits, vegetables, oil, clothes). For a whole day, there are around 150-200 people close together and there is no water source available anywhere. It is a very central place in the village which is easy for all inhabitants to get to. Therefore, we decided to also provide water there. 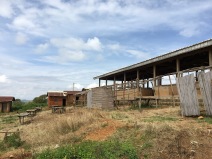 The health centre and the market are around 1.5 km from each other. To get water to these two places, we needed to drill a borehole somewhere in the middle and lay pipes along the main road. Luckily, we were able to detect water and a first cost estimate could be done. For the amount of 10,300 Euros, we could drill a borehole, install an electric pump, erect a scaffolding with a 3,000 litres tank, lay pipes to both places and construct taps to provide water.

Collecting such a high amount of money for a good cause is not too easy. But I was determined to get it done and was off to a good start.

A manager of my company celebrated his 50th birthday and decided to collect money for me instead of asking for gifts: The first 3,000 Euros were collected (Thank you very much Karsten!).

Of course, I was also talking about the project to family, friends & coworkers for a whole year and the word was spread. Additionally, when I travelled to Ghana, I bought 10 backpacks with a Ghanaian print and sold them at a high profit margin to donate as well. All this got me another 1,500 Euros.

But I needed another source of income and decided to organise a charity dinner. On November 30, 2017, I was thrilled to welcome 37 guests to Trattoria Luisa, a fantastic Italian Restaurant in the South of Dusseldorf. Even the founder of Global H2O, James Wilde, had made his attendance and the dinner was a huge success. James, Sammy and I talked about the water crisis and presented the ideas for our Cameroon project. The whole event generated donations of 3,000 Euros!

For the remaining 2,800 Euros, I was lucky to be involved in another non-profit organisation (funded by my sister Marie!), Kinder der Sonne. They were very helpful and decided to add my funds up to 10,300 Euros!

After a 10 hour drive from Yaounde and an overnight stay in Bamenda, which is the capital of the English speaking region of Cameroon. Currently, fights over independence have put the region into a state of emergency and fear, but we reached the village of Mbah safely in the early morning (read more about the crisis here). Right on that day, we met up with all responsibles for the water project, including the water committee, our contractor, the health centre manager and the village representatives. We inspected the sites and made a schedule for the next weeks so that material and workers would be available when needed.

The village itself is surrounded by beautiful landscape. It is embedded in the hills of the Kumbo region and your view is just stunning. People in the village live from what their farms provide: corn, groundnut, huckleberry or mango. Some families own livestock such as goats or cows. However, feeding yourself or your animals and growing your vegetables is difficult if you don’t have access to water when you need it. 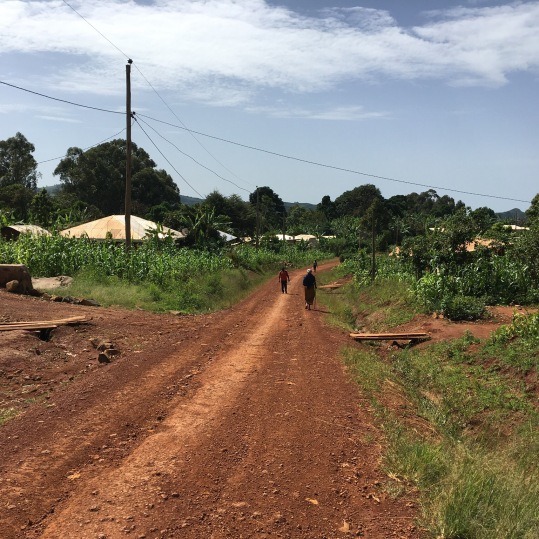 One day after our arrival, the workers started digging trenches for the pipes from both the health centre and the market. Around 8 people were manually the trench to a depth of 50 cm, many of them barefooted. It was hard work, especially when crossing the very dry and hard main road. Luckily there was a lot of palm wine to help everyone stay hydrated and motivated! After four days, it was done, the trench was going all the way through the village and connecting the borehole to the future water spots. 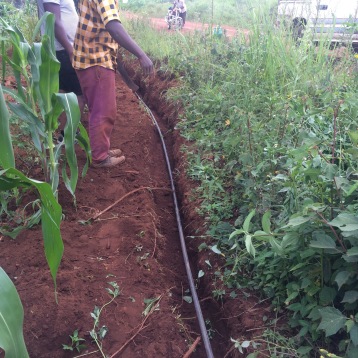 Now, the taps had to be done. The builder arrived on the back of a motobike that his apprentice was riding. They carried their tools and wood slats in their hand, one of many ways of transporting things on a moto. They started by mixing gravel, cement, sand and water (from a spring) to construct the foundation of the tap. While this was drying, the builder started making the frame from the wood slats. The tap itself was put through a pipe and was held upright with concrete. The same procedure was done at the market and took about two days in total. 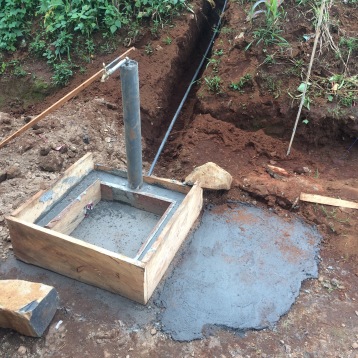 So, now we had the pipes where we needed them and the water was ready to flow from the taps. It was only the borehole that was still missing. Unfortunately, though, there was a major problem with the drilling rig. It was stuck in Bamenda and had problems to get the engine going after it broke down. We knew, this would take a while to get fixed.

In the meantime, we started with the other preparations: constructing the scaffolding for the water tank, erecting a fence around it and providing training for the locals to raise awareness for hygiene, water quality and maintenance. 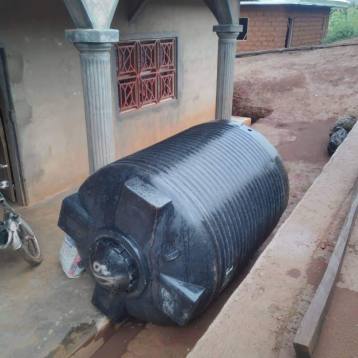 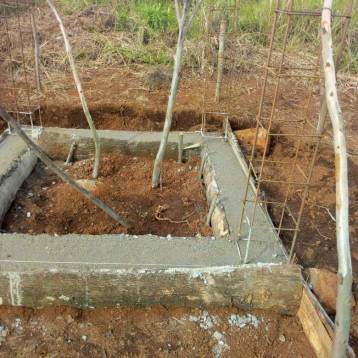 After all this work we had already done, the village representative had organised a big celebration event for us. Everybody came to the market: The representatives of the fon (=one of the regional kings of the Nso), the village head, the council, all title holders of the community, the water committee, the workers, the village women and christian groups…We had a great get together and every group was giving speeches about how this project is going to improve the situation in the area. Sammy and I were overwhelmed when we were given chicken, potatoes, groundnut, pineapples and many more gifts. The fon representatives even conferred us the title “shey of water” and we were handed traditional clothes, a huge honour! After this ceremony, the whole crowd walked to the borehole place and everybody gathered around the spot where the drilling would take place. The village head kneed down and asked the ancestors to provide water enough water. It was a very intense and spiritual gesture, as he also sacrificed some chicken feathers, fruits and we all shared some palm wine. Nothing could go wrong with drilling after this! 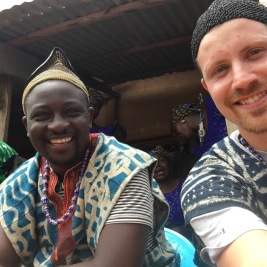 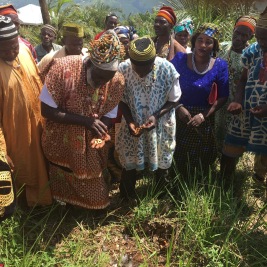 And then, finally the drilling rig came. Everything was set for it to drill and to connect the pump to the water tank. But see for yourself:

We are thanking all donours who have made this water project possible. I also want to convey my thanks from all villagers. We have improved the water situation in the village of Mbah, but there is much more to do. Stay updated about my next projects and feel free to get in touch with me anytime!

You can also read about this project on the website of Global H2O.

Interested in my journey or projects? Write to m.biermann@posteo.de, I will get back to you as soon as possible.